Six kilometres of the network were implemented as part of an ambitious pilot project July 1, 2015. The City has since recorded a 95% average increase in daily weekday bike trips traveling to and from downtown Calgary.

As part of an international consulting team, Alta had a lead role in the design of a cycle track network for downtown Calgary, Alberta. Following a review of best practices, Alta designed a conceptual nine-kilometer network of cycle tracks for the downtown area. A number of considerations were featured in Alta’s designs, including anticipated impacts on motor vehicle traffic congestion, interface with transit stops, intersection treatments, and connectivity to the larger cycling network.

Constructing the network as a complete package is a unique approach that will cement Calgary’s place as a leading city for cycling in Canada. Calgary’s cycle track network now enables safe and comfortable travel through the City Centre for cyclists of all ages and abilities.

The consulting team was proactive in reaching out to supporters in the business community who acted as advocates on behalf of the project to help build support for the proposed network and implementation plan. These efforts were successful in building the support required to win approval for implementation of the network from the Mayor and Council. 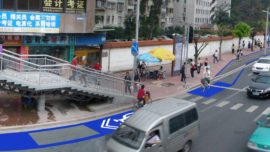 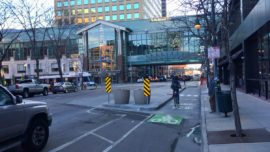 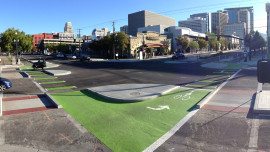 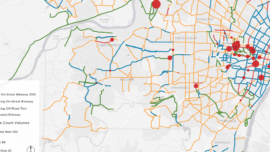