In 2018, LADOT hired Alta to design streetscape improvements along the Sherman Way corridor in the San Fernando Valley. This project is part of Councilmember Bob Blumenfield’s Reseda Rising Initiative, and is intended to address impediments to bicycling and walking along the corridor, promote economic development, improve safety, and foster greater use of multimodal transportation options.

Based on community feedback, the Reseda neighborhood expressed concerns about the blighted appearance of Sherman Way, including non-standard ADA ramps, traffic conditions unfavorable to bicyclists, faded or non-existent crosswalks, damaged sidewalks, and deteriorated landscaping. Many residents are bicyclists and were concerned about safety when riding along the corridor. In addition, the lack of tree canopy had created heat island conditions, often making it extremely difficult to walk or bike at certain times of day.

The project aimed to restore the landscaping areas and provide enhanced bicycle and pedestrian facilities, as well as traffic calming measures along Sherman Way and portions of the adjacent street network.

Learn more about this project here. 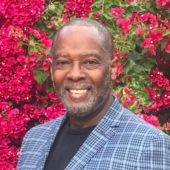